Dreams Can Come in “Larger than Life” Encounter 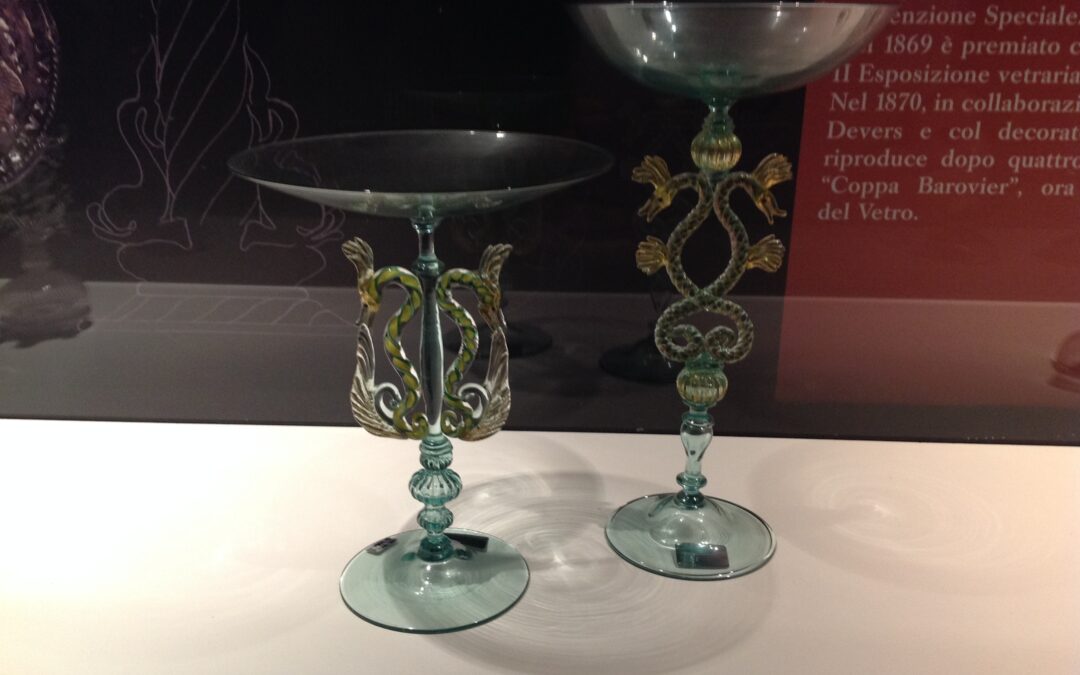 Sometimes a travel experience is so captivating, the moments are forever impressed in our memories. One afternoon while visiting Venice, Italy, two friends and traveled from the Grand Canal to the island of Moreno, known for its glass-blowing factories. There we visited Seguso Glass.

We had a private invitation to visit the most amazing glass factory in Moreno. It wasn’t just any glass factory, it was Seguso, which has remained a leader in glass blowing around the world. 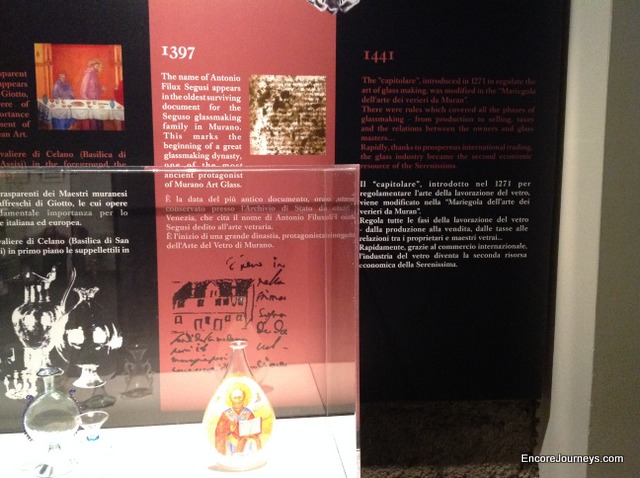 The Seguso timeline goes back before 1397!

From the minute I walked in, the surroundings encompassed me with awe and wonder. I knew I had come to a very special place. My private tour began with an introduction of Lucia, a highly revered employee, who would guide my two friends and me around. We began our tour with a little history of the family.

As Lucia explained the history, we were met by one of the owner’s sons, Gianluca Seguso. To our amazement, he explained about their glass blowing roots going back 600 years to 1397. In fact, a wall depicted their history and special events which occurred over the years since that time. 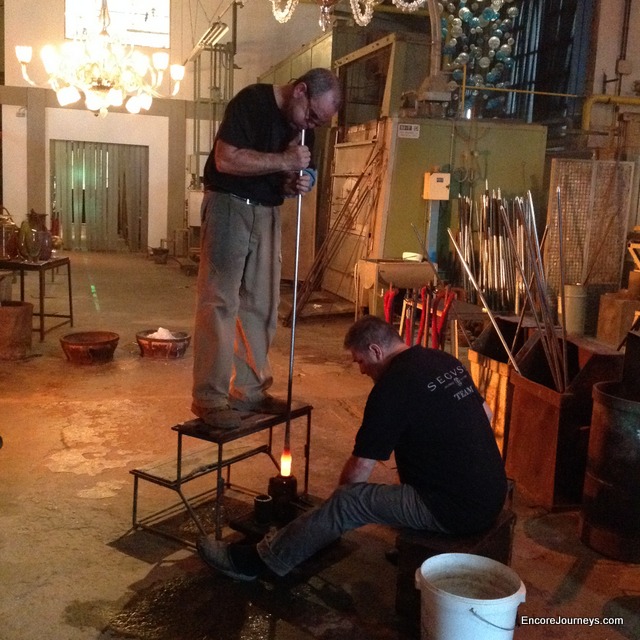 It was fascinating to watch the glass blowers at work!

From there, we moved into the glass blowing area to see first-hand the artisans who create much of today’s glass. These glass blowers work in teams of three and assist each other with various aspects of the glass production, depending on what they are making.

Since we had come at the end of the day, we were able to watch them finish up their day’s work. However, as a special offering to us they asked Lucia if they could make one more object so we could see the process from start to finish, on their own time. We felt so privileged by this gesture that they would take their own time to intrigue us by their skills. 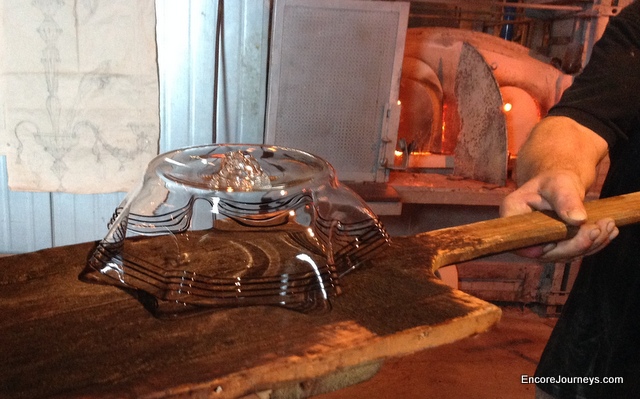 This bowl was created during our special demonstration.

As we left the factory part of the building, we were greeted by the father, Giampaolo Seguso. He invited us into his private studio which held glass-blown objects from bowls to chandeliers. A rare honor, indeed. As a world-renown glass-blower, he is known in many influential circles and yet is very personable. 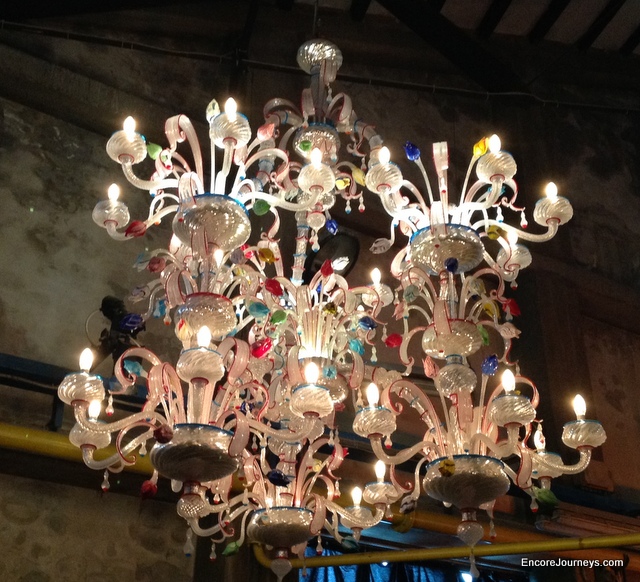 One of many chandeliers on display.

He shared with us many of his creations. For me, the most inspiring were the three hanging glass pieces, representing the wind. He then pulled out a piece of poetry he wrote, which went with these pieces–a poem about his wife, who he had lost three years prior. When he finished reading it, there wasn’t a dry eye to be found as the words were so moving.
He then went on to present us with copies of his poetry book, My page is glass, each personally inscribed to us. Something I will always treasure. 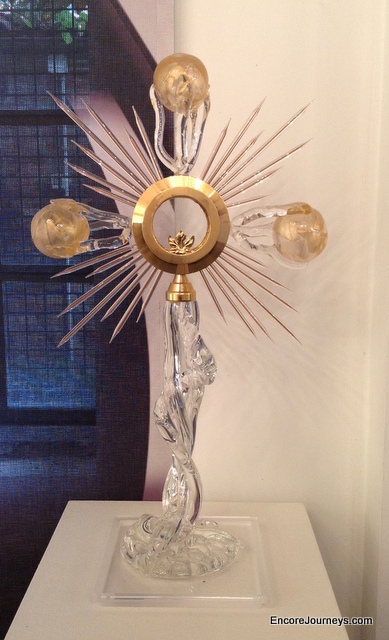 This piece was made for the Pope.

Giampaolo talked about some of the glass pieces he had made over the years. He had been commissioned by the Pope to make a very special piece. To be on the safe side, they made two identical pieces, should one be damaged during shipping. Fortunately, the piece they sent the Pope arrived without issue and Giampaolo was able to retain the second one. As he showed us the piece, he pointed out each feature and its significance to Catholicism.
He also showed us some work he had just completed to celebrate Shakespeare’s 400th anniversary of his birth. He was asked to come up with a few pieces of his choosing. So instead of focusing on Shakespeare’s plays he decided to utilize his sonnets as inspiration. We were able to view these pieces prior to his client.

Lucia then escorted us to their showroom, which holds a variety of glass pieces. She explained that Giampaolo was world renown because he had developed glass blowing techniques never before known to glass blowers. She also pointed out one exceptional piece that had won a world award. Giampaolo had created a new glass color, never before seen. 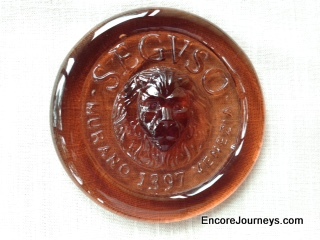 Before we left Seguso, we were presented with a paper weight, hand-made in the glass factory. It contains the head of a Lion, the symbol for Venice, Italy. It sits on my desk, a constant reminder of the captivating experience I will always remember. Of course, I also purchased a bowl that resides in my living room. You can never have enough memories!