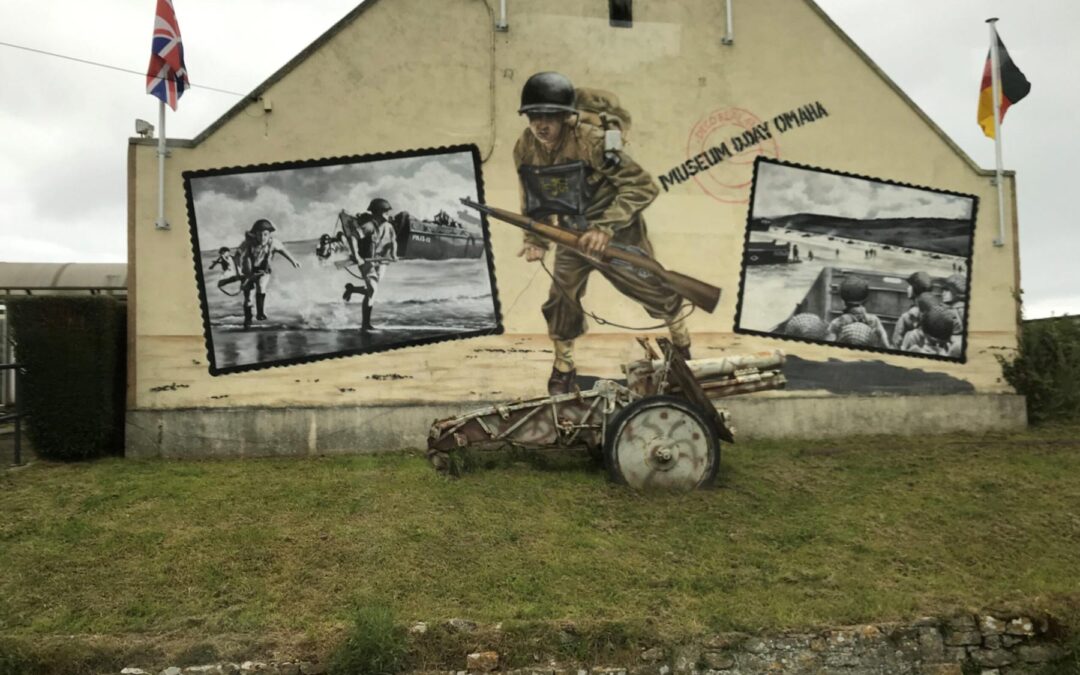 If you’ve ever wanted to visit the beaches of Normandy, France, this would be a great year. The reason? It’s the 75th anniversary of D-Day.  A time to remember the sacrifices of the allied forces who fought to free a continent from the Nazi regime. When talking with the locals of the Normandy region of France, you’ll find that they have never forgotten. They’ve heard stories from parents, grandparents, uncles and neighbors about life under Nazis rule and the effort it took to become a free nation once again.

Much of the destruction over the last 75 years has been repaired. But there are still reminders of what took place during this historic battle.

In trying to decide where to begin the invasion of Europe against German forces during World War II, the allies sent out advance personnel to the Calais area of France. They discovered that this location would be unsuitable for a mass assault and turned their eyes towards the Normandy coast. They also felt that Calais, even though it was closer to England, was too predictable. The allied commanders felt the element of surprise would increase their chances of victory in landing troops for a full-scale invasion of Europe. 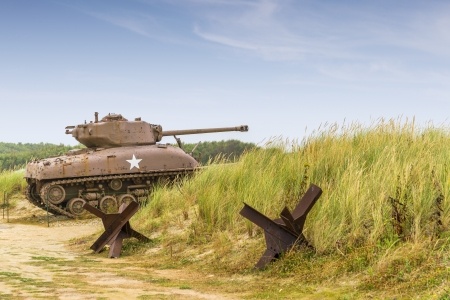 Named Operation Overlord, the planning and preparations had begun several months in advance of the actual D-Day landing.  Crossing the English Channel, which had defeated the Spanish Armada, would be no easy fete.  Plus much of the equipment necessary had yet to be developed.  In addition, an elaborate scheme code named Operation Bodyguard was put into place to deceive the enemy into believing that there was another target.

Simultaneously, the Nazi command believed that the Allies would land at Calais.  To increase their defenses, the Nazis had built the Atlantic Wall, which was a series of fortifications from Norway to Spain. These obstacles in the landing area included large steel structures, land mines, concrete structures and barbed wire. They were meant to slow and even stop any advancement.  These fortifications greatly impacted the forces when they landed on the beaches. 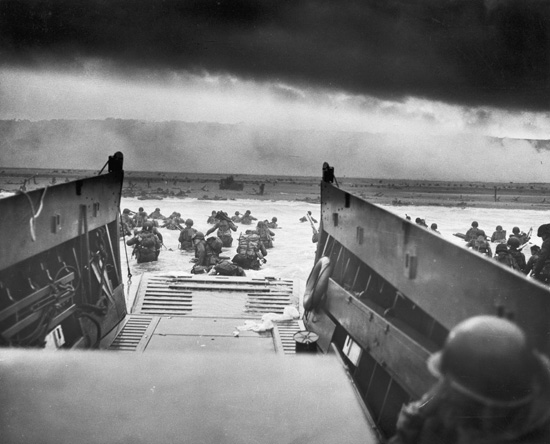 Originally, the launch was scheduled for June 5th, but a weather front had moved in and the seas were just too rough to transverse them.  When the weather advisers said there would be a brief break in the weather on June 6th, the D-Day operation was a go.

The invasion force consisted of American, Canadian and English forces.  Paratroopers were sent in ahead of the amphibious landings. Their objective was to land beyond the beaches, in enemy territory, then advance to the beaches while taking out strong holds as they moved forward.

The beaches had been divided into 5 code names:  Utah, Omaha, Gold, Juno and Sword. The United States advanced on the Utah and Omaha beaches while the Gold and Sword were assigned to the English and the Australians landed at Juno beach. Besides the fortifications, the met gun fire from turrets located on cliffs above the beaches. After a long a bloody day, the Allies were victorious, but not without huge losses.  It was estimated that the Allies’ casualties exceeded 12,000 while the Germans lost 1,000 men. 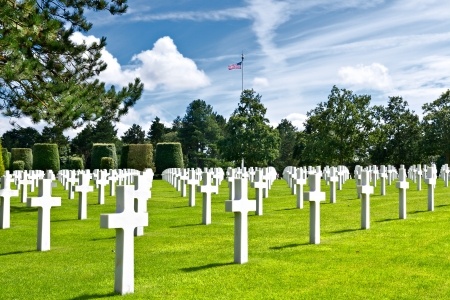 On June 8, 1944 a temporary cemetery was established by the First US Army.  After the war, the current cemetery moved to the position it occupies today.

What can you see today? 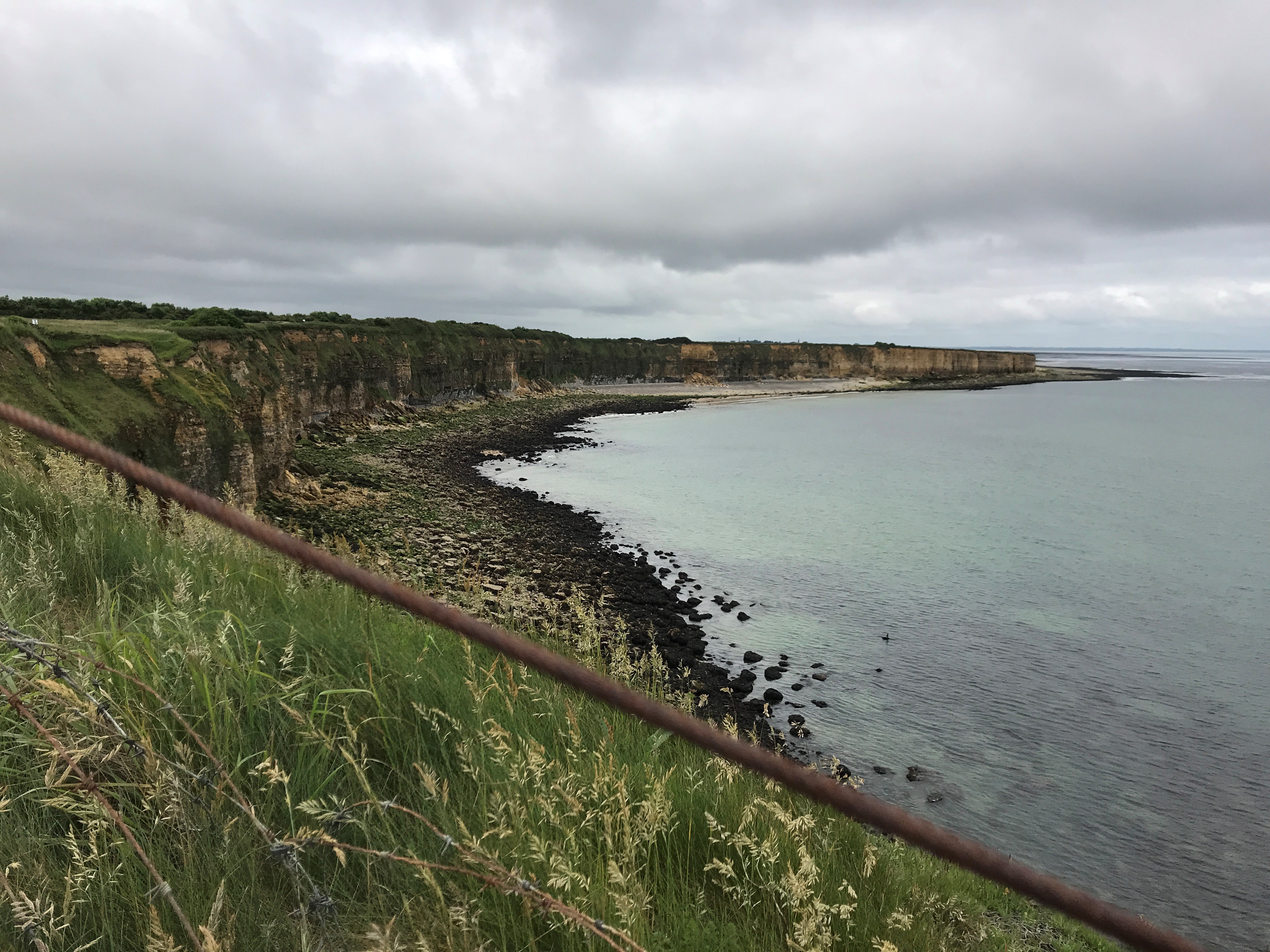 While looking out over the cliffs, you realize how high the troops had to climb to reach the top. In some cases, up 100 feet.  Then you see the beaches sometimes filled with stones so large they presented a formidable obstacle in themselves.

The Normandy beaches reach 50 miles long and today you can see where those troops landed. The barbed wire, steel and concrete structures and land mines are gone. The beaches look as picturesque as they may have been long before this historic battle. 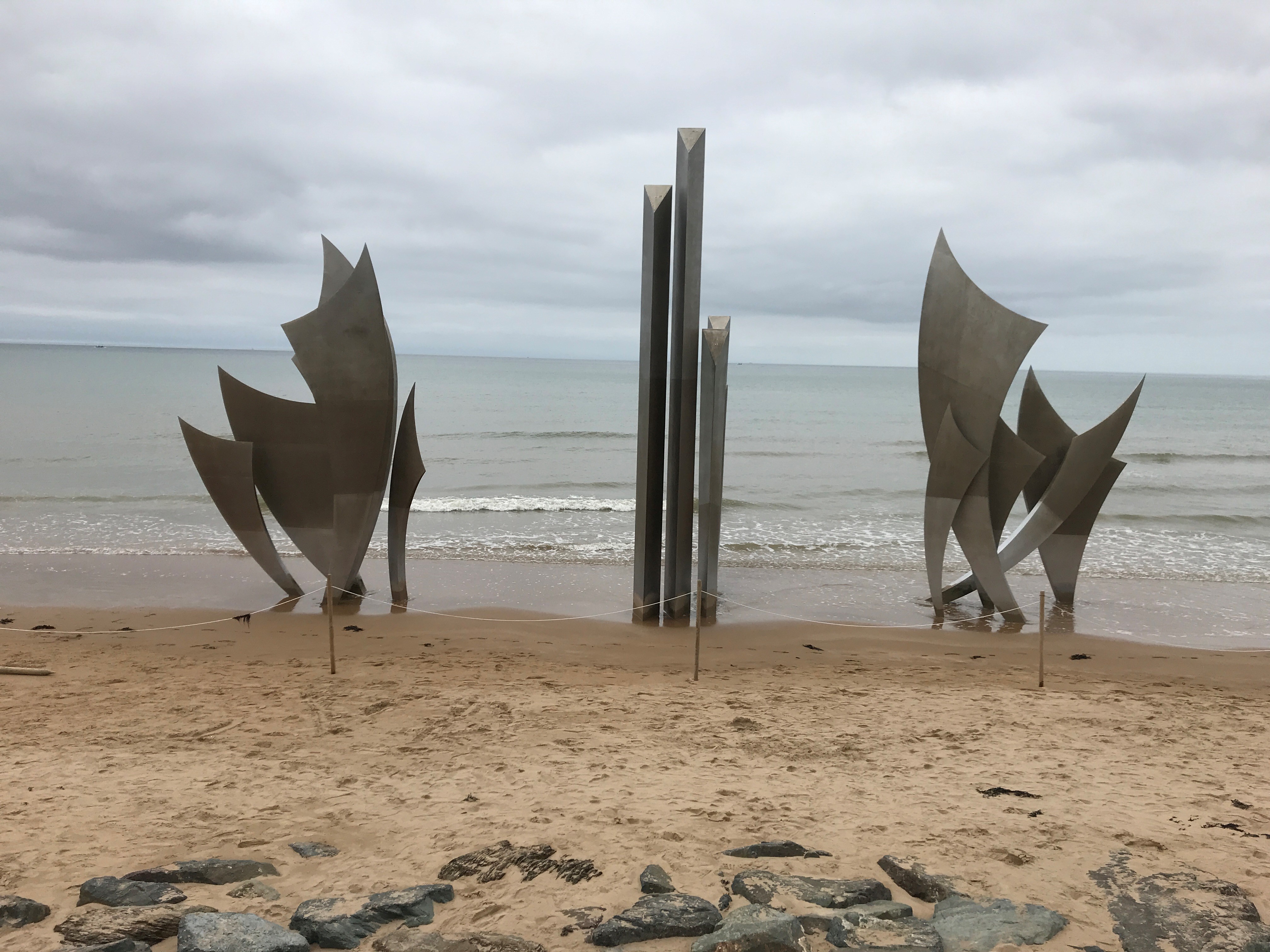 A great debate about how the beaches should be used after the war concluded that they should be restored so people can enjoy them. D-Day memorials and statues on and near the beach provide a reminder of the loss that allows such freedom today. 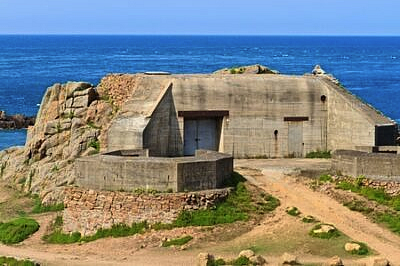 From atop the cliffs, many of the German bunkers still remain. You can follow the paths to where the German soldiers guarded the coast from inside these concrete defenses. 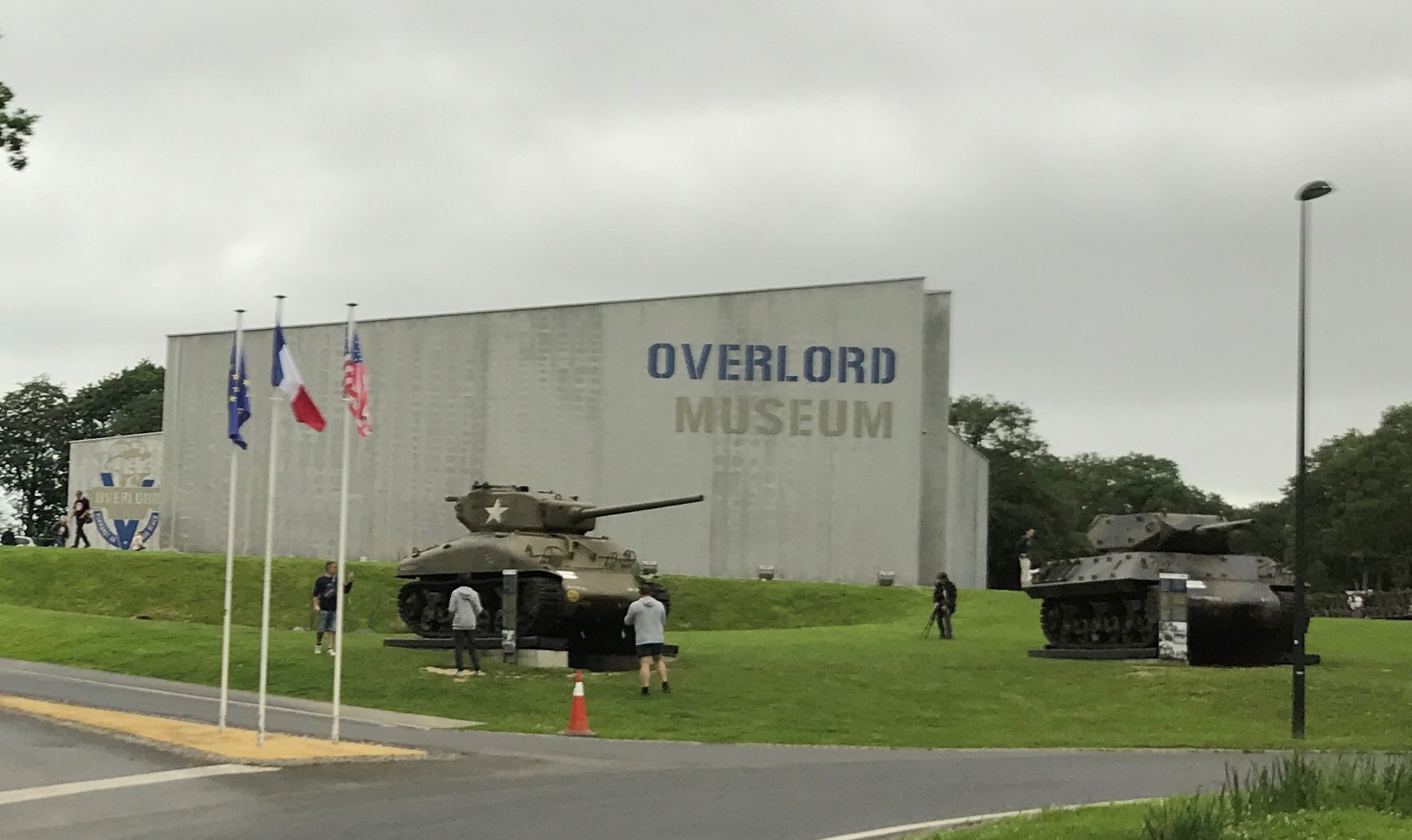 Scattered throughout the countryside you’ll find remnants of equipment—old cannons, jeeps, guns and troop vehicles. You’ll also find a number of museums dedicated to the troops and their units who fought here. 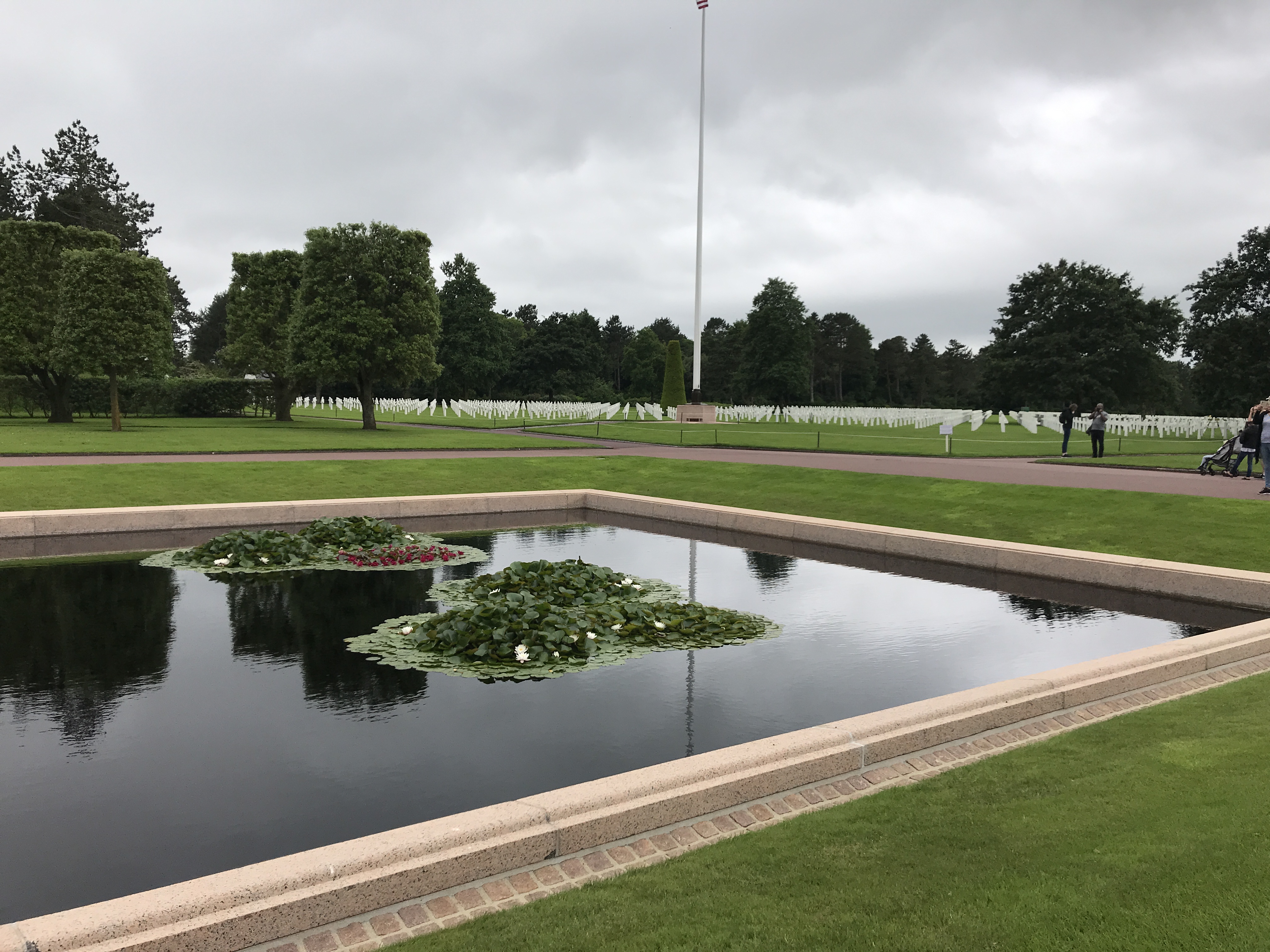 There are also cemeteries for both allied forces and German soldiers who lost their lives during the battle of Normandy and subsequent battles of World War II. A visit to the United States cemetery is a somber and moving tribute to those interred here. Located within the cemetery is a monument, a reflecting pool and museum that honor those fallen soldiers.

So why do we bother remembering those who so bravely fought against tyranny? It’s with the hope that we shall never again have to sacrifice our youth to defeat those who want to control so many others. Let’s never forget those who died so we could enjoy our freedom.

It’s not too late to make plans to visit this area during this celebratory season. A trip to the Normandy beaches and other historical sites can be arranged for you.  You’ll find the people of Normandy very grateful to the allies for liberating them from the Nazi occupation. In addition, this region holds many interesting cities, towns and estates that are not to be missed. Private tours, river cruises and guided tours are still available on a limited basis.  If you would like more information about visiting Normandy, France, give us a call 248-629-4936 or 800-414-3272.